Oieee! Hello everyone! we just change season and ohh how I love the feeling of starting something new, here where I live we’ve got flowers decoration the streets and trees full of new leaves, the days are starting to get longer and the weather has been changing. And I can’t help it, my mind is […]

Since the beginning, I wanted to make this blog about two things: Fashion and the Au Pair Program. That second part came eventually, as I actually became an Au Pair, so that’s what you guys are gonna see most over here. Right now I am working on a new youtube channel in English so I […]

Oieee! Hello everyone, I’ve finally got some great content for you guys and I hope you enjoy it. A couple of weeks ago I found this shirt on Cotton On, which was very similar to what I’ve been seeing on Pinterest, Didn’t think twice, and got it for myself. It was on Sale for less […]

Oieeee! Hey guys, I literally just woke up, drank a big cup of water and started wondering what was I going to do next, and first thing that comes to my mind it~s to share a outfit with you. I mean, I think is a good post for a Sunday, don’t you think? First of […]

Oieee! Hello everyone, first of all I wanted to say how much I’am enjoying writing again, cause around the past six months I was feeling like all the things I used to love to do, became obligations, But since I turn this blog in English it has been nothing but excitement. So I want to […]

END_OF_DOCUMENT_TOKEN_TO_BE_REPLACED 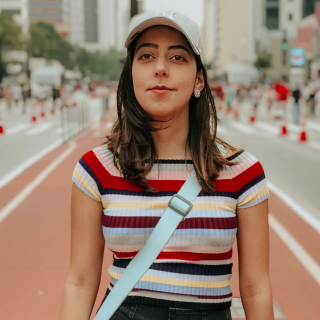 Big City Lover, Fashion Student in São Paulo, Brazil, ex- Au Pair in New York. Living and sharing aall my experiences and ideas over here. Be welcome into this amazing journey called life with me! Don't forget to check instagram and Youtube for more.